A crisp winter day in the steel city, Pittsburgh, Pennsylvania. Glad to have put on an extra layer, you can feel the crispness as you breathe in each gulp of air. The gray skies portend the white flakes that are forecast for the afternoon. The old stone buildings along with the cloudy skies seem to echo our steps on the sidewalk, as the morning traffic has not yet arrived for the days hustle bustle. All you hear is the silence of the still sleeping city, except for the occasional store keeper out sweeping his walkway or a stray taxi heading to a local hotel with a weary traveler. The city of bridges. With 446 of them, Pittsburgh has the most of any city in the country. One of the most vibrant and culturally exciting cities as well. Most people think of Pittsburgh as a grimy and gritty industrial city, which it was as I was growing up in the area, it is now however one of the greenest cities in the nation. Gone is the soot from the steel mills of old. It’s a very good time to be in Pittsburgh.There’s a small-town feel here. Yes, the population is growing slightly, coming back from the period when the steel industry went belly-up and the city lost a third or more of its population. But there is a small population living in an infrastructure created for many, many more people. That smaller population makes for more affordable housing and with the world class hospitals and healthcare available allows Pittsburgh to be one of the best retirement destinations in the U.S. It is a very affordable city to live in. Miles of riverside trails and green spaces, as well as superb public transit and walkability add to the appeal. But for me it is home. My family is still there, brothers and sisters and their families all live within an hours drive from “dahntahn” Pittsburgh.

One of the first things you will notice is the locals speak a distinctly different form of the English language. Pittsburghese has been voted the “Ugliest Accent in America” and I have to admit that our unique dialect takes getting used to but only a “jagoff” would call it ugly. There are some food differences too, like putting french fries on a “sammich”  A Pittsburgh institution, Primanti Brothers is a must whenever we are in the ‘Burgh. It’s not a Primanti Bros. signature sandwich without a generous serving of crunchy, tart coleslaw and crisp French Fries piled high on top of soft Italian bread. “Yinz” are gonna love it!

Another fantastic thing about Pittsburgh is the architecture! I just love the old churches and historic buildings that you find in “Dahntahn” Pittsburgh. We stayed at the historic William Penn Hotel right in the heart of the city. Since opening the doors in 1916, Omni William Penn Hotel has played a starring role in the city of Pittsburgh, hosting movie stars, politicians, heads of state and leaders of business and industry. A fantastically opulent lodging choice, we truly enjoyed our few days there. The service was exceptional and the accommodations were very comfortable. I highly recommend it  for your Pittsburgh stay.

We were in town for an annual charity event that my sister puts on each year that I will spend more time on in a separate post. It deserves more than a scant paragraph here. We had the morning free to go out and explore the city on foot, so we got up early and headed out into the early morning light. What we found as we stepped outside of the door was that they were wrapping up a nights filming of the Will Smith movie “Concussion” that will be released later this year. That was pretty exciting. The last visit we made, they were filming “Jack Reacher” starring Tom Cruise. As we sat and had breakfast at the famous Pamelas, we saw Tom go by filming a car chase scene. The visit before that they were filming The Dark Knight Rises. So there is a good chance that a film will be shooting most any time. Pittsburgh has become a great film location over the last several years. I had the opportunity to ride in the elevator with Will Smith and a very large security guy as I made my way down to the lobby Starbucks. Rubbing elbows with the rich and famous, ha ha. So off we go on a bitterly cold morning to stroll through the city.  Down the street from the hotel is a beautiful old church.The First Presbyterian Church dates back to before the Revolutionary War. Roots of Presbyterianism in Pittsburgh go back to 1758 when the British defeated the French at Fort Duquesne at the point of Pittsburgh’s three rivers. Upon this defeat, the name was changed to Fort Pitt, later to become Pittsburgh. 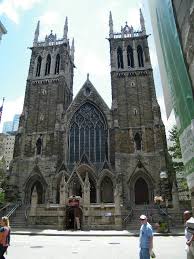 A magnificent structure located at 320 6th Ave, right in the heart of the city. Guided tours of the church are led at the end of Sunday morning service.

Also a very imposing and unique structure is PPG Place. The gleaming crown jewel of the Pittsburgh Skyline. PPG Place sits atop a 5.5 acre, three-city-block site in the heart of downtown Pittsburgh adjacent to historic Market Square. The shimmering glass complex is centered on a 40-story office tower, reflecting the skies, hills, rivers, and buildings of one of America’s most livable cities. The building was prominently featured in the Batman movie the Dark Knight Rises.

The gleaming glass and steel structures, known worldwide for their breathtaking design, were developed by John Burgee Architects with the internationally renowned architect Philip Johnson from New York. This complex with its thicket of 231 spires was designed to weave into the architecture of Pittsburgh and recall the city’s great buildings, such as the Cathedral of Learning and the Allegheny County Courthouse. PPG Place’s neo-Gothic forms are the perfect architectural bridge between the historical structures of the city and the newer geometrical high-rise towers.


Historic Market Square is a great place to hang out with a multitude of eateries and shops to browse in. John Campbell and Thomas Vickroy, while creating the city block plan for streets in Pittsburghs center, created Market Square in 1764. It was known originally as “Diamond Square” or “Diamond Market” for the Scotch-Irish idiom “Diamond” representing a public commons or square. What makes Market Square special? The eclectic mix of old and new, from the Oyster House, which opened in 1871, to restaurants and watering holes that have just opened their doors. The free events, from concerts and rallies, to one of the region’s best Farmers Markets. And, the big events, like the annual Light-Up Night® and Irish Fair in the Square. And perhaps most of all – the people. Market Square is Pittsburgh people watching at its finest. Market Square is home to the above mentioned Primanti Brothers and our personal favorite Wingharts Burger and Whiskey Bar. House ground meats and a great selection of whiskies and beer on tap make this a great choice. I recommend the Shipwreck Burger, with caramelized onions, brie cheese and white truffle aioli , oh and bacon too. The absolute best burger we have ever tasted. Yinz have to try it!

Some other historic sights in the city are shown below. We have thoroughly enjoyed our exploration of this great city with so much rich history to be found at every turn.